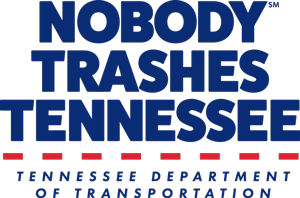 Every Year, It Costs Tennessee More Than $15 Million To Clean Up Roadside Litter. It’s Time To Put An End To This. Keep Your Trash To Yourself And Our Roadways Clear. Because Nobody Trashes Tennessee.

A statewide litter study is conducted in Tennessee every 10 years. These studies identify the amount of litter on Tennessee roads, the types of litter, where it can be found, and actionable findings that will strengthen litter prevention efforts. Ultimately, the goal is to be strategic in reducing litter pickup costs to taxpayers.

• There are 100 million total pieces of litter on Tennessee roadways, down 53 percent since 2006.
• 28 percent of litter is classified as intentional litter, meaning it’s thrown right out of vehicle windows.
• 72 percent is considered negligent litter, which includes vehicle debris and trash flying out of uncovered pickup truck beds.
• Beverage containers, lids, and straws are the biggest problem with deliberate litter (11 percent). Within that category, snack food packaging (6 percent), napkins, paper bags, and tissues (5 percent), and cigarette packaging (2 percent) represent the next most significant items.
• Interstates have the most negligent litter, while state highways, U.S. highways, and local roads have more deliberate litter.
• Litter accumulates in places of high traffic, and in places where little to no personal ownership is present, such as rest stops.

“From the Great Smoky Mountain region, to the Mississippi River, and every stretch of roadway in between, litter on our highways takes away from Tennessee’s natural beauty. It’s not only an eyesore, but it costs TDOT more than $15 million a year to clean up.”
John Schroer
TDOT Commissioner

National comparison: A 2009 national litter study by Keep America Beautiful found that there were 51 billion pieces of litter on roadways, costing government and businesses $11.5 billion.

GET THE KIDS INVOLVED!